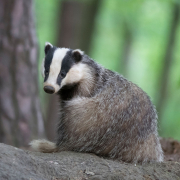 After observation it turns out to be a female who had completely eaten herself with blackberries. The female badger was quite young: 2 to 3 years old. According to sources, badgers live to be around 15 to 16 years old in the wild, but the average age is around 5 years because the species is regularly hit by cars. 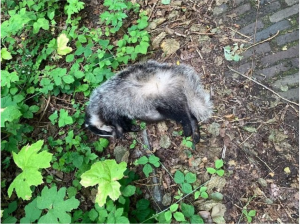 How does the badger live?

The badger belongs to the mustelid family and is one of the largest land predators in the Netherlands. It is a nocturnal animal that leaves the burrow (gait system with several tunnels) at sunset and goes in search of food. They eat almost anything, but mainly search among the grass for worms, forest fruits, tubers, mushrooms and much more. The eyes of the badger are adapted to the dark, because they see minimally in daylight. The eyes are small, and it mainly uses its nose and ears for looking for food and guarding its territory.

The largest population of badgers lives in the Veluwe, North Brabant and South Limburg. There are around 12,000 badgers in the Netherlands. In 2022, 40 badgers were observed in North Holland with the help of observations.nl.

In the field study center

The 4 mushroom tips for in the field